A Broken Rose And A Serving Of Crow 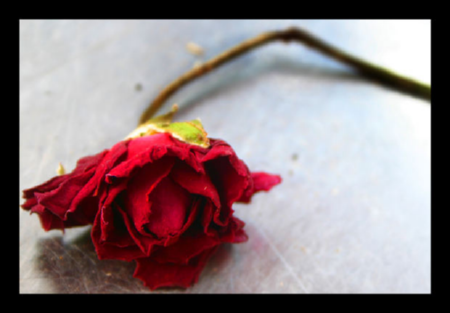 This post is a departure from my usual. Normally, I try to teach in my posts. Usually, it’s a business lesson. Today, I’d like to share a life lesson I was taught just hours ago.I sincerely love people – although at times they are a major source of angst in my life.But at the end of the day, if I’m paying attention, they always provide me with some sort of life lesson.My career is fast moving, full of long hours, planes, airports, and hotels. My success in this career is absolutely and utterly dependent upon efficiency.Because those are the standards I live by in my business life, I tend to get tunnel vision and expect everyone else to live by those standards as well.When I physically move about this world, I do so quickly and purposefully. I pay attention to what’s happening around me – and I assume everyone else lives that way, too. I try to get to where I’m going as quickly as possible without being rude to or impeding anyone else’s progress.

It Started In Dallas

Today I flew home from Dallas with a layover in St. Louis. A lot of very important balls are up in the air right now at work, so I’m multi-tasking my ass off making phone calls, emailing, texting, and just moving quickly in general.Virtually everywhere I went today, someone between me and where I wanted to be was moseying.A woman in Dallas stopped in a fast moving boarding line to fiddle with something in her purse as if she was the only person around, bringing the rest of us to a screeching halt.I sighed and thought, “You HAVE to be kidding! Come on! Some of us have places to be!”One guy in St. Louis was standing with a fountain drink sipping away right in the middle of literally hundreds of people trying to get to their gates. The crowd parted around him and then closed up again on the other side of him like a stream flowing around a big boulder that sits in the middle of it. He was totally oblivious as he stared off at God knows what.I felt that vein in my temple twinge and muttered something profane to myself, disgusted with his level of rudeness.I could go on, but suffice to say that this scene repeated itself over and over again throughout the day. I was beginning to become very impatient with and sick of my fellow man.

Safe At Home Base?

A few hours later after I arrived home in Omaha, I stood waiting for my luggage to roll by on the carousel. As soon as I got my hands on my bag, I started walking quickly toward the front door to catch my shuttle back to the long term parking lot.Wouldn’t you know it?Right in front of me was a woman who stopped walking abruptly, almost causing me to run into her. I somehow refrained from verbally accosting her, but I’m not proud to admit that I was thinking all kinds of colorful, angry thoughts in my mind.“How can someone be so stupid and oblivious? What the hell? How rude! Do you think you’re the only person here????”She eventually moved and exited the building.We wound up on the same shuttle, and I was not at all happy that the only seat left on the shuttle was smack-dab next to this woman.It was my only option, so I sat down next to her.

She Served Me Crow

This woman who I had labeled as rude, selfish, and clueless looked up at me and smiled weakly. She was clearly making an effort to smile through something. “Hi”, she said – and she looked back down at her shopping bag. Her smile didn’t stay with her.Sticking out of the top of her bag was a floral arrangement. It was all greenery and sticks and other decorative things that I’m not informed enough to identify properly. But I did notice that there was no color in the arrangement – no flowers.I noticed she was holding a big, beautiful, broken rose in her right hand. There was only maybe three inches of stem left below the huge bud.She looked at me again and said sadly, “I almost got it home. It’s been fine all day. It even survived in the cargo hold … and then when I got my suitcase, I broke it. I can’t believe it.”She looked sadder than a person ought to be over ‘just’ a flower. It clearly represented something bigger to her.I felt small.Tiny, in fact.She wasn’t rude or selfish or oblivious after all. She was sad. That’s why she stopped abruptly and interrupted my stride.“I’m sorry. That’s a shame”, I said.I began to imagine that maybe it was a floral arrangement from a wedding she just attended – or maybe from a recent funeral of a loved one. Wherever that rose came from, it was clearly important to her and breaking it had hurt her deeply.We spoke more on the ride back to the parking lot. She was very nice – and I scolded myself the whole way for assuming earlier that she was some kind of idiot.

We all get wrapped up in our own lives and forget that other people are dealing with things too. They may be different things than ours, but that doesn’t make them any less important.Maybe those other people who frustrated me earlier in the day really were just jerks. But maybe they were so distracted because they were dealing with some issues that were really important to them.

It’s difficult to step out of yourself and see things from someone else’s perspective, but you have to make an effort to do so. Consider the fact that whoever is driving you up a wall may not be the one who’s clueless.Sometimes you are the clueless one.Today I was.If you enjoyed this post, you’ll also enjoy How to Overcome Adversity and Steal Its Power.