What Not To Wear Airport Edition: Crotchless Suit Pants

A couple Mondays ago, I had a day that I just have to share with you. It’s funny now, but I assure you I didn’t find it funny at the time. Let me walk you through that Monday.4:00amI like my alarm. Even at 4am.The alarm I use is an iPad app and I wake up to Weezer’s Beverly Hills. I usually let it play for a while.After the song finished its awesomeness, I shut the app off and started my airport prep routine.As I shuffled off to the restroom half asleep, my bare big toe found the leg of our big, heavy coffee table and… 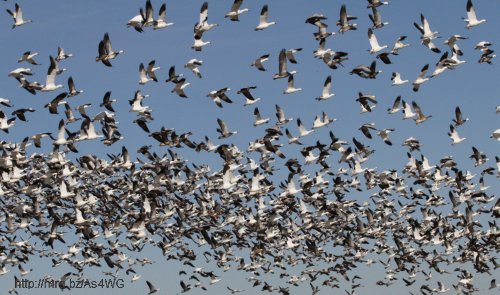 You know those scenes in movies when they zoom in real tight to some guys face just as he starts to scream, “FFFFFFFFFFF……” and then they cut away to shots of flocks of birds flying away and stuff like that? It was kind of like that. I’m not proud of it.As soon as I was able to breathe again, I regrouped and started getting ready for my trip. 5:50amAfter suiting up Barney Stinson style, I made the short drive to the airport and pulled into long-term parking. And what luck! The shuttle practically followed me into the lot. No waiting.To top it all off, as the shuttle pulled up I could see that it was being driven by one of the coolest people I have ever met – Mel.I mention Mel because you’ll be getting to know him very well soon in an upcoming post. This guy is an incredible human being. Stay tuned.Mel and I had a great chat all the way to my stop at the Southwest terminal.6:15amCheck-in went well and when I got to security, the line was shorter than usual for a Monday. Early Monday is normally really busy. Other than a sore toe, everything was moving along nicely.Suspiciously nicely.I got through the security checkpoint faster than usual.Did you ever have the feeling that maybe too many good things were happening at once? That maybe you had used up all your good karma for the day? Like maybe the other shoe was about to fall?After having been poked and searched and all that jazz, I stood there waiting for my scanned items to roll out of the x-ray on that conveyor belt thing.

The sun had come up by then and I remember thinking, “What a beautiful looking day!”Maybe it was too much positivity and cheer. Who’s to say?But when I squatted down to put my laptop back into my roller bag, I heard it.The sound of tearing fabric.   Yep.    I split my suit pants.(Remember the “FFFFFFFF…” guy and the birds?)There were kids around, so I just did it in my head. But the sentiment was there.Hoping for the best, I thought, “Maybe it’s just a small tear.” No one around me seemed to notice what had happened, so I reached down and checked things down there as tactfully as I could.Nothing but leg skin and a cool breeze.I didn’t just tear my pants. I split the entire crotch out of my pants. The EN-TI-RE crotch.

They say that when huge life-or-death type emergencies happen, our adrenaline kicks in and we react brilliantly based on instinct.Conversely, when something bad happens that is merely embarrassing, no adrenaline kicks in. In fact, I have found that in those situations some yet to be discovered hormone kicks in that makes you stupid for about 60 seconds.So my brain had the following brilliant conversation with itself: 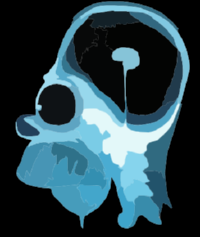 “Ok…no biggie. I’ll just buy a sewing kit and fix this up in the bathroom.”     “You’re in an airport, dumbass. They tend not to sell sharp metal objects here.”“Oh yeah. Too bad I can’t find a stapler.”     “Also sharp. Also metal. Twice as stupid.”“Shut up.”On the off chance that the TSA had recently gotten over their aversion to pointy metal stuff on flights, I am ashamed to admit that I actually asked the poor girl at the gift shop if they sold sewing kits. Out loud.You know how dogs sometimes stare at you blankly and tilt their heads back and forth? It’s not as adorable from an adult human.There was no time to go home and change. There was also no carry-on bag with an emergency suit in it. I was screwed, amigos.Faced with the very real possibility that I would be spending the next six hours showing my “bidness” to everyone on my flights, I had to think of something.And then – right there in the gift shop I had a flash of brilliance(?) 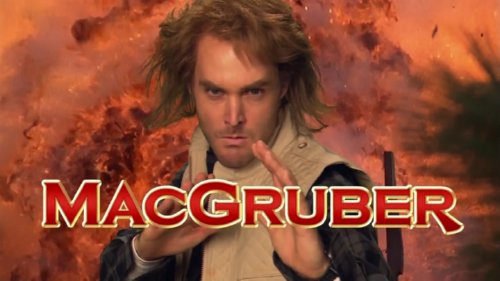 Oh yeah. You know it.I started spy shopping for anything that could be used to stitch my pants up in the 14 minutes I had left before boarding.Know what I came up with? Spearmint dental floss and tweezers. That’s right. Needles are a big no-no on planes, but apparently any ol’ thug can get their hands on tweezers in an airport.So if you ever hear of an elaborate tweezer hijacking plot being thwarted, remember that you heard it here first.

A Mental Picture You Didn’t Want – Or Need

Here’s the funny part. At least to me. At least now. I was not laughing then.I want you to imagine a big old 6’3” man in a handicapped bathroom stall, pantsless but still wearing a jacket, tie, black socks, and dress shoes – trying to sew up a hole in the crotch of his pants using spearmint dental floss and tweezers as a needle and thread.Ok, I may have smiled a little bit when the “MacGruuuuberrrr” song from SNL kept popping into my head.I was sweating horribly and worried about the time – like Macgruber defusing a bomb. My plane was supposed to board any minute.You may have already guessed this, and I hate to state the obvious – but it’s not easy to sew with tweezers and dental floss. Somehow, though, I eventually got the job done. I was kind of proud of myself and ashamed at the same time. Plus, my pants now smelled like spearmint. Bonus! 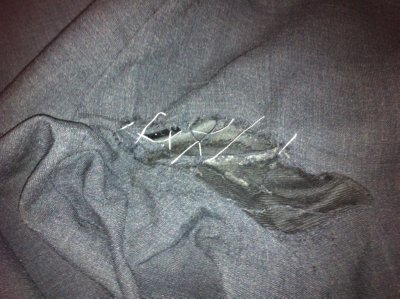 As a perpetual 12 year-old, I had to allow myself one more mental celebration of, “MacGruuuuberrr!” before rushing out to what I thought would be my boarding flight.No one was even lined up at the gate. Through the window I noticed two mechanics by my plane. They had the cover on the planes left engine opened up and were inspecting it.After a long wait, they cancelled my flight because of a leaking engine. That entire absurd debacle was for naught.So as it turned out, I had about 8 hours to go home and change.

What I Learned From This Experience

Nothing, really.Except that every once in a while, the universe likes to make sure you’re not getting too cocky by giving you a sharp blow to the solar plexus…or possibly the crotch of your suit.I hope you enjoyed a laugh at my expense. I did!Have a great week!

Now You Fess Up!Share your most embarrassing moment.Or spill the beans on someone else’s in the comments section.