The Albert Einstein Guide to Influence 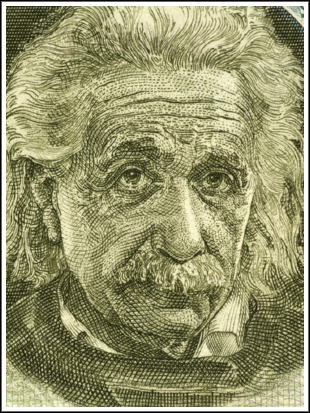 Have you ever noticed that ridiculously successful people tend to have similar ideas and attitudes about things?Even in the most unrelated of industries, the core beliefs of the super successful seem to find common ground.I’ve always been intrigued by the life of Albert Einstein. I’m no scientist by any stretch, and most of his work is so far over my head, I can’t even see it… but I’ve always been fascinated by the man.You’re here because you want to learn the art of genuine influence and make something special happen. You and I have that in common – the desire to do something significant.So why not learn how to do that together today from someone truly significant?Here’s a collection of Einstein quotes – and a suggested translation from me of how you can use his bits of wisdom to further your own pursuit of awesomeness and expand your influence.

If you can’t explain it simply, you don’t understand it well enough.

If you truly have a grasp on your topic, your product, your service, or your business – you can describe it succinctly. Think elevator pitch.

If you are out to describe the truth, leave elegance to the tailor.

In my opinion, the number one reason people fail to influence others is because they talk too much and listen too little.When you talk too much, you make things too confusing for the listener. And when people are confused, they tune you out. When they tune out, they aren’t likely to get behind you or your business.If you have something of value to say – say it in terms that everyone can understand. Keep your concepts simple, and don’t try to impress with ten dollar words.

Make everything as simple as possible, but not simpler.

You could take this a lot of different ways. I prefer to think Einstein was talking about knowing your audience when he said this.Einstein (and many others) wrote volumes of text on his theory of relativity. I’m sure he delivered lengthy, detailed lectures on the subject as well. That’s all well and good for the academic and scientific communities. But he was also known to explain the theory to laymen like you and me by saying…

“When you are courting a nice girl an hour seems like a second. When you sit on a red-hot cinder a second seems like an hour. That’s relativity.”

Be aware of your audience. Walk the line between too complex and too dumbed-down.Keep your message as simple as possible and tailored to the audience you’re delivering that message to.

The True Nature of Knowledge and Intelligence

Seeing as the man was one of the great minds of our time, I’ve always admired Einstein’s offhand near-dismissal of his own genius. He seemed to have a simple and respectful view of intelligence. There’s much to be learned from these attitudes for an aspiring influencer.

It’s not that I’m so smart, it’s just that I stay with problems longer.

You’ve heard it from so many great minds and captains of industry. Don’t quit. Few attributes are as useful or as valuable in life as persistence and fortitude. Confucius said that our greatest glory wasn’t the fact that we never fall… but the fact that we get up every time we do.

No problem can be solved from the same level of consciousness that created it.

Apparently Einstein subscribed to the “if you do what you’ve always done, you’ll get what you’ve always gotten” mentality. Funny how many insanely successful people keep telling us this, isn’t it? Maybe we should listen. Take a new angle, add a new twist, and change things up whenever you can. It’s the best way to spark significant change.

The true sign of intelligence is not knowledge but imagination.

Very rarely does a brand new piece of knowledge enter this world. Most new innovations and major discoveries are spin-offs or adaptations of things we’ve already known.Disney didn’t invent the amusement park, they perfected it. Apple didn’t invent the computer, or the portable music device, or the telephone – but they mashed them all together and have done pretty darn well for themselves in the process.

Imagination, or the ability to see already existing things in a new lightor in new combinations, is the heart of genius.Tweet this!

Information is not knowledge.

I’m not sure of the context in which Einstein said this, but I like to think of it as a comment on experience. Any relatively intelligent person can absorb information from books. Most people can memorize facts, figures, or processes fairly easily. But knowledge, in my opinion, comes from putting that information into play, testing it, and learning from the results. Real knowledge comes from action.

Intellectual growth should commence at birth and cease only at death.

It gives me great pleasure indeed to see the stubbornness of an incorrigible nonconformist warmly acclaimed.

One of the things I’ve always admired about Einstein is his ability to mix wisdom and humor. Paul Vixie once said that conformists and rebels are really the same thing. What do you call a large group of nonconformists? Conformists! It is pretty amusing if you think about it.

In order to be an immaculate member of a flock of sheep, one must above all be a sheep oneself.

Mark Twain agreed, apparently. He warned that any time you find yourself on the side of the majority, you should pause and reflect. It’s true in business, too. When you’re in good standing with “the in crowd” or with “what everyone else is doing” it should give you the creeps just a little bit. If you want to learn more about breaking away from the herd, grab a free copy of my eBook, How to Influence All the Right People..

A person who never made a mistake never tried anything new.

There are a couple of underlying truths in this quote. First – you have to try new things to achieve new things. Makes sense, right? Take calculated risks, fall down, skin a knee – and grow in the process.Secondly – be incredibly suspicious of someone who is seemingly always right – or who never shares their past blunders. They’re being disingenuous.

Based on much of what was written about Einstein, I like to think he had a philosophical and even sentimental side. Many of the quotes attributed to him seem to denote a lifelong sense of wonder, gratitude and humility. All three of which are excellent qualities to have – in business and in life.

Admit it. You get caught up in all the noise and find yourself chasing success, don’t you? It’s the age old chase for the money, the fancy car, or maybe that big house. I’ve certainly been guilty of it from time to time.But as you grow and mature as a human being and as a business person, you begin to realize that material success is not the thing to chase. Rather, it’s the byproduct of a lot of really important other things. Things like contribution, gratitude, and servitude. When you consistently put those things out there, material success crosses your path you. You don’t have to chase it.

Once we accept our limits, we go beyond them.

That may sound like a Tony Robbins quote to you, but I assure you it came out of the mouth of Albert Einstein. To me, this is partly about humility and partly about knowing your weak spots.A lot of people have trouble admitting their weaknesses, being wrong, or accepting that something was their fault. And I think that’s too bad, because when you identify your weak spots, you’re exposing opportunity.When you know and admit your weaknesses, you can either work at improving in those areas – or get help from someone who is good at those things. Either allows you to move forward. Denial results in stagnation.

The monotony and solitude of a quiet life stimulates the creative mind.

Living in the digital age as we do, it’s frightening to think that there’s a whole generation growing up now who may never know quiet solitude. I love technology. I love that I can stream movies, music, or lectures 24/7. I love that I get hundreds of pieces of information that I’m interested in sent to my inbox every single day. And I love that I can communicate to all of you with just a few clicks anytime I want to.But after a while, it all builds up. You’ve felt it. I know you have. Your calendar is full, your brain is full, your emails are piling up, and you feel like if one more item is added to your plate you’re going to lose it completely. It’s information overload. Overstimulation.Sometimes you need to reset. Just go away. Shut it all down and go sit by a lake, or go to the gym and get a good sweat on without anything tugging at you or vying for your attention.The next time you feel the overstimulation building up, shut down, go away, and reboot.

When you’re gone from this world, what kinds of things do you want said about you? How do you want to be remembered?“That Joe drove a Mercedes at one time.”“I remember Joe. He was the highest earner in the office in 2013.”or“Mary was the kindest person I knew at work. I learned a lot from her.”“Mary was always willing to help when I needed her.”You decide. I know which one I’d choose.

He who can no longer pause to wonder and stand rapt in awe, is as good as dead; his eyes are closed.

This may be my favorite one of all. If you can’t stand looking up at a sky full of stars, or a sunset, or a newborn baby and think, “Wow. That’s truly amazing!” – well, then… you may want to do some soul searching. Maybe you need to slow down, or get away, or consider a total reboot.The world is full of AWEsomeness. It’s in nature, it’s in the nice things that strangers do for each other, it’s at your Mom’s house, and it’s in your child’s room. Why not go bask in some of that awesomeness today?.I want to hear from you.Which successful people do you find inspirational? Are there any tips or quotes you hold near and dear that have helped you achieve more? Let’s talk about it in the comments..

The Albert Einstein Guide to Influence
.
..