Is Disqus Killing Your Blog? Why (and How) I Pulled the Plug 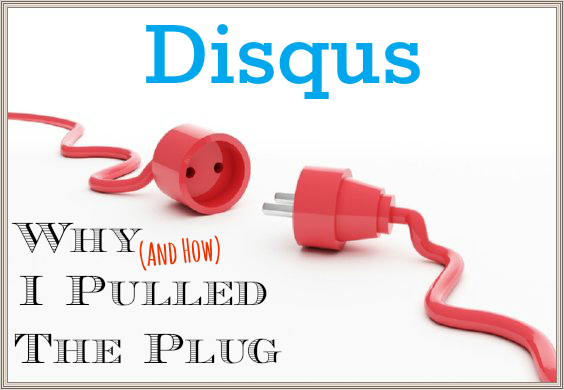 I recently made the decision to remove the Disqus comment system from my blog.And it wasn’t a knee-jerk reaction.I did quite a bit of research first and got a lot of feedback (both solicited and unsolicited) from others.In this post, I’m going to walk you through my experiences with Disqus as a blog owner, my readers’ experiences with it, and the advantages and disadvantages of Disqus.We’ll  also cover how it could affect you in your online efforts.*After 445 comments (thanks!), we’ve closed new comments on this post. Keep an eye out for an update!

Why I Hated to See Disqus Comments Go

I loved Disqus. From the standpoint of a blog owner, I have nothing but good to say about the back end and functionality of Disqus.I loved all the configuration options, their way of threading comments, and especially the functional and attractive emailing system.They have various options available for managing, moderating, and changing the appearance of comments.I was a Disqus lover.From the place where I stood, all was well.But all wasn’t well.

When the Feedback Started Rolling In

One of the great things about my audience is they regularly communicate with me. I hear from readers consistently through social media, email, and in my comments.From time to time, I hear complaints about certain things. And I really do consider them all. But at the same time, complaints can occasionally represent a tiny percentage of a group – and sometimes they represent a majority.So when complaints arise, you have to take them seriously and weigh them in terms of how they affect the majority of your audience. For the most part, I had very few people complain about Disqus to me – so I assumed only a few subscribers disliked it.But then, a comment thread in one of my posts turned to a discussion of Disqus. The results made me begin to think more people than I realized were unhappy with it and just weren’t speaking up. So I asked for feedback – and man did I get it.Here’s just a small sample of the public feedback I received during that time…

That’s from Mary Jaksch, a friend of mine from A-List Blogging. An ally. And yet she was frustrated enough to publicly comment on my post about how much she disliked using Disqus. She also let me know how she felt about it (in no uncertain terms) in private conversations, too.The bottom line is, the only reason Mary used Disqus on my blog is because she wanted to support posts she enjoyed that were written by a friend. Regardless of how much she liked the post, if we hadn’t been friends, she wouldn’t have bothered.

Here’s a comment from one of my subscribers in a comment thread in which I asked for feedback about Disqus. I did a quick search through my comments – and I couldn’t find any prior comments from her.But she felt is was important enough to break her normal Disqus rule and weigh in on this discussion. I’m glad she did.

Gee, I wonder how Sophie really feels? (A question no one has asked… ever.)That from another person I really respect, my friend Sophie Lizard of Be a Freelance Blogger. In addition to being a friend, Sophie is one of the brightest people I know, so when something annoys her enough to leave a comment like that, I listen.And finally…

This tweet was posted the same day as Sophie’s comment, and it put me over the top. It was the last straw.Here’s someone who really connected with my post who tried to comment but got frustrated and gave up. Thankfully, they went to the trouble to tweet my post and voice their support anyway.(Thank you @SkinnyBudgetMkt!)Something was going on, and it wasn’t something good. It made me wonder how many of my other readers felt the same way, and as a result weren’t bothering to comment on my posts.Think of all the missed interactions and all the potentially awesome conversations that may have never happened.I still didn’t understand why people didn’t like Disqus.But then it hit me. We preach it all the time…It’s not about you. It’s about the audience.As much as I pride myself on being in touch with my audience, I clearly wasn’t in this case – which is unacceptable. It’s my responsibility to make sure I’m on top of things that affect the audience experience.

Why (at least some of) My Readers Hated Disqus

Not only did I like using Disqus on my blog, but I enjoyed using it as a visitor on other blogs as well. It was easy to use. I couldn’t wrap my mind around this quiet but verifiable dislike of Disqus.So I went back to many of those people who had sent me feedback and asked them what they didn’t like about it. Here were the three most common answers.

3: It’s difficult to manage multiple identities.Some people have multiple online projects or identities. For instance, let’s say I have this blog – plus a side business selling artwork online. The argument is that if I want to be able to choose which identity I want represented by my comment on your blog, I have to log in differently. In WordPress comments, there’s no login. You just type in your information.

Interesting. At least it was to me. Because I personally didn’t understand most of these objections.The way I saw it…

Hassle:I never considered this. To me logging in is easy and fast. I’m used to it.

Privacy:I don’t mind online services knowing my social networking information. In fact, I go to great lengths to spread that around. And the risk of a reputable service like Disqus commandeering my social media accounts wasn’t a concern to me.

Multiple Identities:Now this one made sense to me. It wasn’t something I personally had to deal with, but in this case, Disqus would most certainly be a hassle to use when compared to WordPress comments.

Update! Some things have changed since I wrote this post. Download my FREE No Fluff Guide to Duplicating My New Non-Disqus Comment Systemto see what they are!

But you know what? Whether I agree or disagree with their reasons, my readers’ opinions matter more than mine. You all need to be able to feel comfortable here and interact with the content.The audience had spoken. The decision was made.I backed up my existing comments to WordPress and deactivated Disqus.

What I Did After Disqus Went Dark

Instead of boring you with all the different comment systems available out there, I’m just going to tell you what I decided to use.I ultimately went with the system that would split the difference between back-end ease for me – and ease of use for my audience. I chose to use the native WordPress comment system plus the free version of the CommentLuv plugin.The feature most people like about CommentLuv is also the most criticized feature. It’s the fact that readers leaving comments get links back to their latest post.On the upside, this feature encourages more traffic and activity on your posts. On the downside, many argue that it encourages spammy comments.Additionally, some people feel the free version of CommentLuv is so feature-poor compared to CommentLuv Pro ($67, $87, or $97 depending on the license) that it’s not worth using.If you take a good look at the features of CommentLuv Pro, you’ll notice many of the really useful features come from other plugins.After a bit of research, I found I could grab most of those plugins (at least the ones I was interested in using) for free – without having to use CommentLuv Pro.Sure, I’m missing out on some of the other features. But then again, I don’t really want or need those features. Someday, if I decide I need them, I’ll go buy Pro. Untill then, I think I’ve struck a nice balance. Here are the plugins I’ve installed to support the free version of CommentLuv.

How to Use Free Plugins to Enhance CommentLuv

The free version of CommentLuv allows you to reward commenters by providing a link back to their most recent blog post.

The Growmap Anti Spambot Plugin (G.A.S.P.) helps keep automated spambots at bay. Prior to this comment system change, I had always used Akismet. You can find information applauding or cursing either. I’m currently using them together with no negative repercussions. Give it a try.

Subscribe to Comments Reloaded allows your readers to subscribe to a comment thread. This is one of the functions I liked about Disqus and didn’t want to lose. This one isn’t as impressive as the way Disqus does it in my opinion, but it’s easy, functional, and gets the job done.

Dofollow allows you to remove the nofollow attribute from your comments. This means your readers who post comments not only have a chance of people clicking through to their post, but they’ll also get some link juice (credit for being linked to) out of it. It’s just s nice thing to do to help out your active commenters.

You can find a list of the other plugins on the CommentLuv Pro page and decide for yourself which features you’d like in your comments.So far, my configuration is working pretty well for me.

The Jury is Still Out

I’ve only been using the above configuration for a while now, and it’s hard to tell what the full impact of the change will be. However, a few questions have been answered at least to a degree.

Have the “I hate Disqus” messages stopped?Well, yeah. The plugin is gone, so they’ve stopped.

Has the new configuration made life easier for me?No. But then again, it’s not been a huge pain either. You do have to keep an eye on moderation more with this setup because it’s not as good at detecting spammy comments. Speaking of spam…

What about the spam?Disqus was wonderful at detecting and properly categorizing spam. I always assumed Akismet was catching it all. It wasn’t. Disqus is damn good at it. So now I’m running both Akismet and G.A.S.P. and I still have to watch more than before. The spam isn’t horrible, but it’s also not better, or even equal to how Disqus handled it.

Have you noticed more comment volume than before?Not yet. I’ve only had a couple of posts go live, but so far the number of (real) comments have been about the same. So, to a degree, I’m wondering if those who mentioned their dislike of Disqus were just venting – or if this will really make a difference long-term. It’s still very early, so time will tell.*Update: The first day alone of this post resulted in the most comments to date on a Reboot Authentic post. So it appears this answer will be changing to “yes.”

How do you feel about all this?Does the comment system dictate if you’ll take part in the discussion or not?Let’s talk about it below… in the non-Disqus comments 🙂