Why Your Customers Want You To Be Fun, Transparent, and Even Weird Sometimes 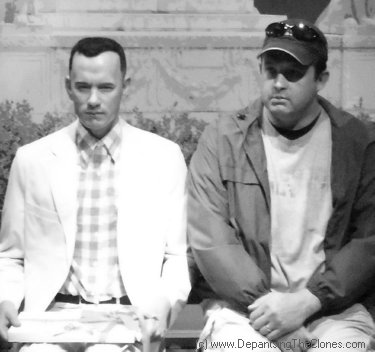 I love Southwest Airlines.So much.It’s not quite 7:00 in the morning here and I haven’t even taken my first sip of coffee yet – and I am compelled to drop everything and write this post.Why?Because they do a great job and they’re reliable, sure.But also because of an uncommon level of fun, transparency, and even outright weirdness that they let their customers in on.

An Interruption Of The Tedium

I have a flight to Dallas tomorrow at 6:00am, so as soon as I woke up today I walked down to my home office to print my boarding passes.My mind was full of all the tasks I need to do for work today: ‘Remember this’, ‘don’t forget to email that’ and so on. The usual task-oriented stuff we all have to do in between creative moments.

A programmer, given the choice, will more often put himself in a quiet spot with his computer and get to work. A salesperson will most likely go find someone to engage if given the choice.

You get the idea.

So this morning I was all about tasks…which as a people person, is not my favorite place to be. I do it. I’m good at it when I have to be – but it’s not my happy place.Task one this morning was to print my boarding passes on southwest.com. When the screen loaded, I saw this… 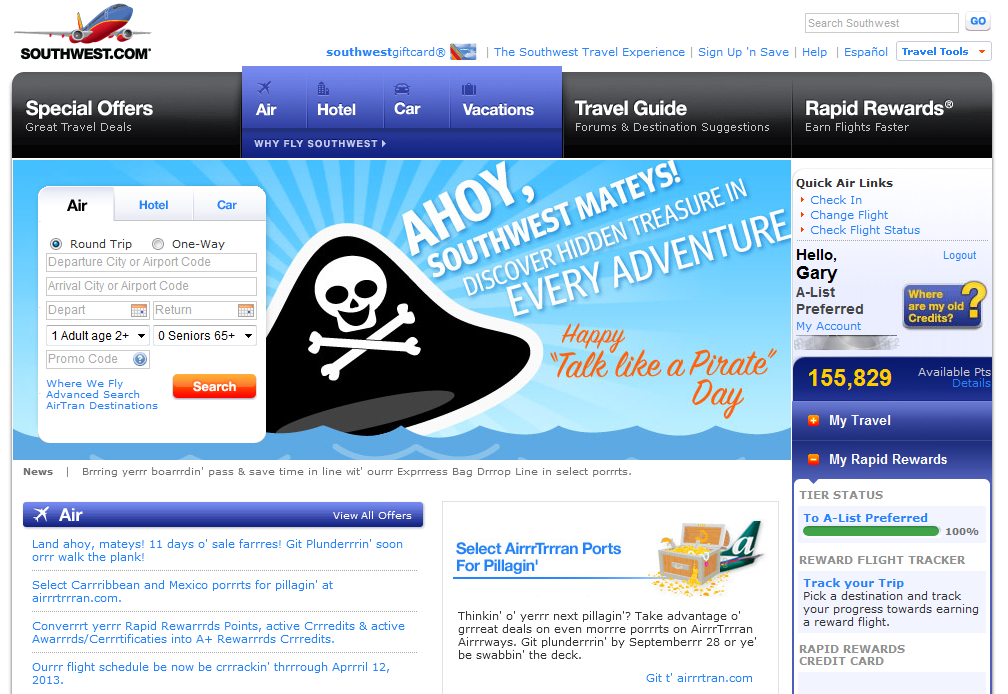 Seriously??How ‘bout that?A big-time legit company took the time to have some fun.Southwest let their IT people take part of their day to translate their entire home page into Pirate-ese for Talk Like A Pirate Day.I didn’t even know that was a thing …but I’m loving it.Here’s the home page below the fold… 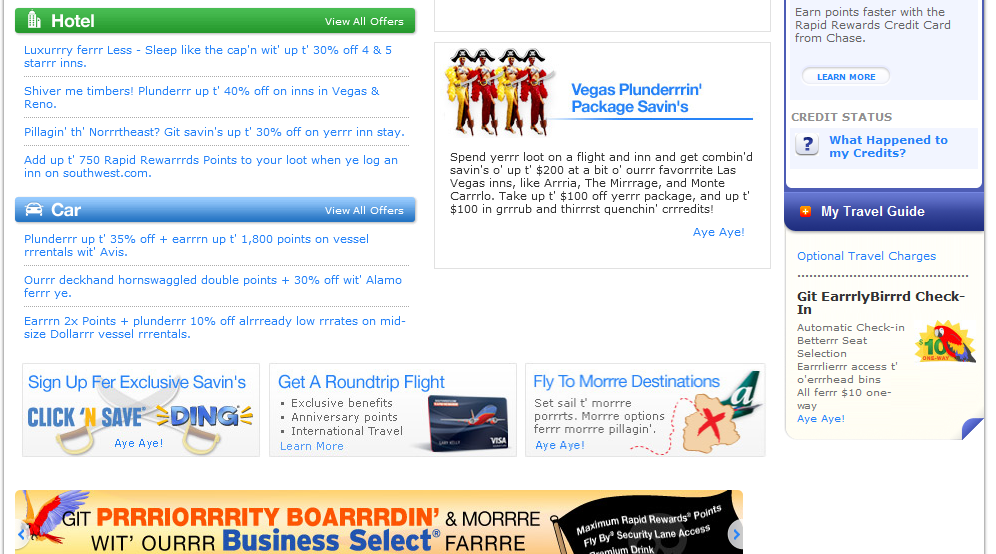 Notice that even the banner ad at the bottom is in Pirate-ese.

Why It’s Fun (And Smart) To Show Your Colors

It’s just outright goofiness, really.But here’s the smart part: As I read it, a smile came over my face and I noticed that I took the time to read every ‘matey’ and ‘arrrrr’ on the page. As I read, I smiled and even rolled my eyes a few times.I found myself thinking, “Yep…that’s Southwest alright” as if the company was a single person who I personally knew.How powerful is that?I pictured the Southwest staff staying late, typing this stuff, and having a great time together at work.In case you missed that: HAVING A GREAT TIME AT W-O-R-K.I’ve said it before and I will say it again…and again: I love Southwest.They’re reliable, their customer service puts every other airline I’ve ever flown to shame – but most importantly they take time to be REAL.This isn’t some faceless, soulless big company. They have a culture and a personality – and they transparently show it to the world whenever they have an opportunity to do so.

What Is Your Culture And Personality?

When a professional person or organization takes the time to show its personality, it endears people to its brand. Its shows them that you are human and that you enjoy doing what you do.