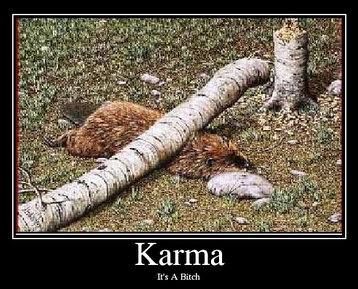 Someone did something nice for me today. Someone I don’t really know very well.He had no obligation to do it, and his only reason for doing it was because he thought it was the right thing to do.The world could use more people like this guy, don’t you think?Let’s talk about the concept of Karma. That’s my word for it. You can say it’s God helping those who help themselves – or you can say “what comes around goes around.”It’s sad that our first reaction to someone doing something nice for no apparent reason is suspicion. In this day and age, the A-holes are certainly more noticeable than the nice guys, aren’t they?But there are still people like this guy out there. I’m learning that there are a lot more of them than I thought.I know enough about this guy to know that he has a reputation for being a giver and a supporter. And…as a byproduct of his behavior…life has rewarded him.Notice I said as a byproduct.This is very different than doing something nice and expecting something in return. Giving with no expectation of reward oddly enough leads to reward. Interesting. Karma.Today someone did something nice for me.I liked what I received, but even more I liked what I took away from his actions…That I want to be more like him.