How to Reboot, Rejuvenate, and Reload For the New Year As the holidays pass, we each have a fresh, new calendar in front of us.Another 365 chances to grab opportunity by the throat and wring every last bit of potential out of it.That’s exciting to think about, isn’t it?Recently, I wrote that the holidays are a good time to sit back and do nothing.A time to just be. To appreciate, relax, and soak in the season. And I really hope you took that advice to heart.But that advice is only one third of my New Year Formula that will get you ready to take on the year of opportunity that lies in front of you.Today you get the rest of the story.

How to Tear the New Year a New One

Here’s my three-phase plan for wrapping up the old year and launching full-boar into the next.

1: Reboot & Rejuvenate:This is what the holidays are about. This time of year, business activity naturally slows down. It’s prime time to spend with family and friends – and therefore is also prime time to let your mind rest. Take a break from the constant push forward.

2: Reflect:This down time is also a great opportunity to reflect back on how far you’ve come up to this point. At times like these, when you’re not in the middle of the usual grind, it’s good to look back in time and appreciate your journey so far. Assess what’s gone right and wrong – and take some pride in your progress.

3: Reload:Then, when quiet time is over after the holidays, it’s time to reload! This is where you make your plans, set your goals, assemble the troops, and get fired up for the continuation of your push forward.

Since we’re nearing the end of the holiday reboot and rejuvenate period now, How about you join me in reflecting back on Reboot Authentic’s last year – and then reloading for the challenges that lie ahead?Let’s do it…

It’s Time to Light the Candles

Not only is it the end of the calendar year, but it’s also the one year anniversary of the launch of Reboot Authentic. In retrospect, I’m thrilled with our first year together.At the time I launched the site (December 27, 2012), my subscriber count was barely in the double digits, I had no social media following, and no online reputation at all. 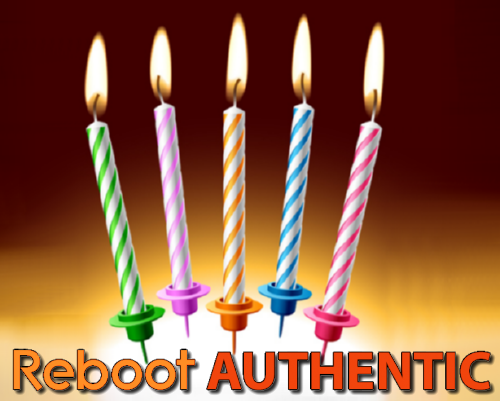 Today, I get to guest post for, correspond with, and occasionally hang out with some of my online heroes – people who seemed so far away and so unreachable to me just a year ago.Awesome people like Mary Jaksch, Danny Iny, Leslie Samuel, Jon Morrow, Jeff Goins – and so many others who have been so great to me and so supportive of this blog.I’m not throwing those names out there to impress anyone. I really just want to give credit where it’s due and give a shout out to those to whom I am endlessly grateful.In just one year, Reboot Authentic has become a thriving, growing community – and I have all of you to thank for that. None if this works without you. NONE of it. Thank you.

Why All That “You Can Do It” Talk is True

If you’re one of those who thinks all the content out there that claims, “you too really can build something significant online” is a bunch of crap – I’m happy to be able to tell you you’re wrong.And don’t take that correction as a beat-down. Be happy you’re wrong about this one – because it means that if you really want to, you can make it happen. It’s happened for me this year.Reboot Authentic has gone from literal (not relative) obscurity to a well-regarded blog. It’s far from an A-List blog, but it’s gaining traction – and that in itself is a huge win.I’ve learned from the best, made (mostly) wise choices, and reaped the benefits. Ready for the cool part?I am absolutely, positively 100% convinced that YOU CAN TOO.If this year has taught me anything, it’s that if you’re a smart, hard-working person who’s willing to commit, the blogosphere is your oyster. You really can make something significant happen.Don’t misunderstand, though. It’s not all sunshine, lollipops, and Wild Turkey – as much as I’d like it to be. There’s a difficulty factor, and a dark side to this whole experience, too.

Even though Reboot Authentic has come a long way in a short time, there are times when I feel like I should have accomplished so much more. I’m sure you’ve felt the same way at times. You know – when you see people who started at the same time accomplish something you haven’t yet. Be it subscriber counts, selling a product, or whatever the benchmark may be… it can be frustrating.You may be happy for them, but it can still make you feel like you’re behind schedule, or doing it wrong, or just not good enough.I understand that, but it’s really a false concern. It can be detrimental to your morale and ultimately, your success.You absolutely need to get an education, take courses, and read up on how to succeed online. But you need to do it with a mindset of learning the right principles while not measuring yourself by someone else’s yardstick.You’ve read those posts about getting 1,000 subscribers or generating $3,000 a month from your blog in your first year.And, hey – I’m not saying that stuff doesn’t happen. It most certainly does. I personally know people who have done it. Some of the people I’ve mentioned in this post have done that – and more.But here’s what you need to remember: The people giving that advice aren’t you.They may be wildly successful. They may very well have done those things themselves. Their method of getting from here to success is probably spot-on.But they’re not you. You can’t measure yourself against what they’ve done.

There’s No Deadline For Success

Maybe their schedule allowed them to put in 20 hours a week while building their business. What if you only have 8?What if they were single in a studio apartment and could live on less? Meanwhile you support an entire family of five with a mortgage and two car payments.Can you expect the same results in the same amount of time?One isn’t better or worse than the other – they’re just different.The important thing is that you learn the right principles, apply them as often as possible……and nevereverE-V-E-R stop trying.Success doesn’t come with a countdown timer. It’s no less impressive or significant if it takes a bit longer.It helps to think of your online success as a hike up a big mountain. If you spend most of your time looking up, then all you see is what you haven’t yet accomplished.The trick is to keep your eyes in front of you – focused on what’s ahead.Then, when you get tired, exhausted, and discouraged – stop and take a breath. And as you recuperate, don’t look up. Look back.Look back down to where you started and appreciate how far you’ve come. You’ll be struck with a sense of pride and find yourself motivated to take on the next leg of your climb.

As you read earlier in this post, I fell in with a good crowd my first year online. In fact, I’ll go as far as to say that the odds of Reboot Authentic growing like it has this first year without those relationships would have been slim to none.Behind every great company or person is a whole cast of characters who have helped them attain success. Very rarely in the history of mankind has anyone achieved significance without strong relationships.I’m sure you’d like to think that you’re smart enough to become successful all by yourself. Hell, I’d like to believe that about myself, too… but most of the time it just doesn’t work that way.I recommend that anyone who intends to make a serious run at building something significant online do these two things as aggressively as possible:

1: Become a JoinerNot a follower. Not a lemming… a joiner. Put yourself in places where other people like you hang out. Join forums, courses, associations, Facebook groups, and clubs.

Get to know people who are doing the things you want to do. And after you join, don’t just loiter around and use up everyone’s oxygen. Participate! Get to know people, ask for help, and offer help.

There’s something powerful about sharing ideas and common interests with others who have similar goals.

2: Build Relationships Behind the ScenesTake it a step further and get to know people outside of classes, forums, and blogs. That means other bloggers, other online business people, your followers, and your customers.

Just because we all operate online doesn’t mean that the personal touch is dead. It’s as important as ever. Email people and tell them you like what they’re doing… ask your customers to Skype or email them once in a while, and offer to lend a hand (no strings attached) to someone who you can tell needs it.

I recently read an article online that said, “you can’t pull off those personal touches once you get big.” I totally disagree with that.Granted, it’s much harder when you’re big, but I know 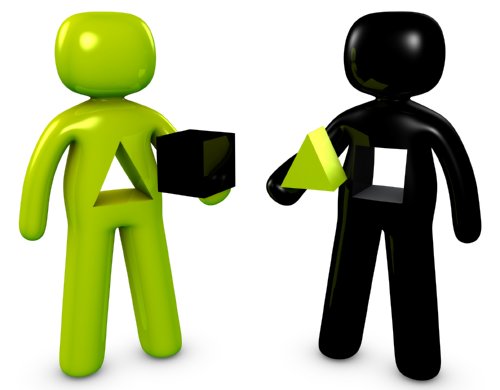 many successful companies online and offline who still pull off those personal touches and provide exemplary service.Danny Iny and his team at Firepole Marketing are an excellent example. They’ve grown at a crazy pace over the last couple of years and still provide one of the very best customer service experiences anywhere.Why? Because they’ve made it a priority – and they teach how you can do it too in their Audience Business Masterclass.Melissa and the crew at Selz.com are the same way. They’re wonderful people who are attentive and available to their clients. People are their priority.You need friends, cohorts, and mentors. Make relationships – REAL relationships – a priority. Relationships are how you get from where you are now to where you want to be.

I don’t know if you’re happy with where you are right now or not. But I can reasonably predict that you want something more. You want to accomplish something that’s not currently within your reach.I’ve had amazing year here at Reboot Authentic – and I want your next year to be at least as satisfying for you.I want to share something with you that one of my online mentors, Mary Jaksch, shared with me. If you don’t know Mary, you should. She’s an amazing person who has had a profound effect on me and this blog this year.There’s no dramatic ending to this post. No 10 steps to online success. No homework.Just a request.Please take 7 minutes of your life right now, go somewhere where you won’t be interrupted, turn up the volume, and let this video motivate you to come out swinging in the new year…

Thank you again for a wonderful year. I appreciate each and every one of you. As the video says…

You Want Something… Go Get It. Period.

Where do you want to be in a year?  What are your plans to get there?  Let’s talk about it in the comments.