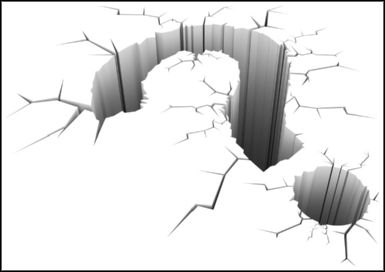 Do you know someone who’s a ridiculously effective salesperson?You know who I’m talking about – the one who always seems to have a constant flow of new sales.It kind of irks you, doesn’t it? It’s alright. Admit it.Not that you begrudge anyone’s good fortune, but you feel like you’re doing all the right things just like they are – but without the successful ending.

But still… your sales come in like a slow, steady drip… drip… drip.

If you really have done all those things well, then your sales and marketing skills probably aren’t the problem.And if that’s the case, then you might think that your next course of action should be to get a bit louder and flashier. Make bigger claims, talk yourself up, or learn some slick, sneaky sales tricks, right?Wrong.Those are ineffective and disingenuous tactics that act as a smoke screen between you and the real problem.The problem that is so easy to solve, you’ll kick yourself for not thinking of it.But real sales isn’t something you do to someone… it’s something you do with and for someone. It feels perfectly natural, there is no pushing, and the person being sold doesn’t feel like they’re being sold. They may even enjoy the process.Real ultra-successful people tend to be masters of the fundamentals – the core, foundational skills of selling. And there’s one fundamental step that the ultra-successful never, ever leave out of the sales process.Let’s look at an example.

The Best Way to Sell a Salesman

The other day, I was catching up on reading my email and came across a new post from John Morgan. His blog is one of my favorites.I thought the post was excellent, so I commented and then clicked the Tweet button on John’s site to share the content with my followers.Here’s what happened next… 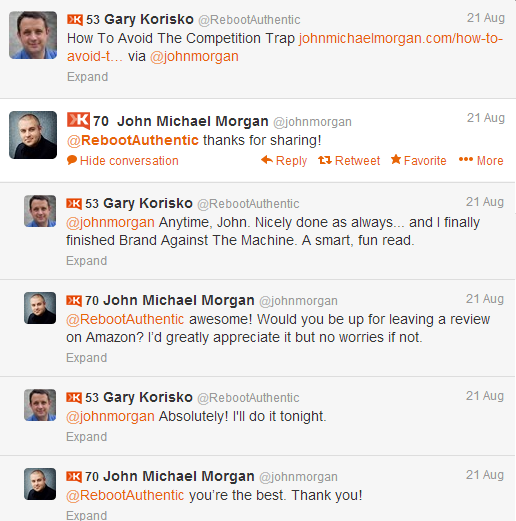 This, friends, is real selling.I know, there are no buzzwords flying back and forth, no ten-dollar words, and no pressure. No money exchanged either. Just a couple of people having a conversation.John knows I’m a fan because I regularly comment on his site and share his information. So when he saw me share this post, he did what any good relationship-builder would do. He thanked me. And if I’d have stopped there, he would have stopped too.But then I mentioned his book, Brand Against The Machine, which I loved by the way.(affiliate link)John, like every other author on the planet, is very interested in getting positive reviews because it helps sell more books. Knowing that I’m a fan already – and also knowing that most people forget to leave a review, he saw the opportunity to ask for what he wanted.He asked for me to take a couple minutes out of my night to click a few links and say that I liked his book publicly. I received great value from reading that book, so I was more than happy to oblige when directly asked to do so.In a matter of five minutes and a mere 23 words, John got exactly what he wanted. No pushing, no schmoozing, no fuss.All he had to do was ask for it.After a pleasant exchange like that, what do you think my answer will be the next time John asks me to do something for him?So simple. So obvious. So powerful.

“Sometimes the first duty of intelligent men is the restatement of the obvious.” — George Orwell

How to Exploit the Power of “Just Ask”

It’s brilliant in its simplicity, really. We’ve built up such a negative, inaccurate, cartoonish image of what sales is that we’re all terrified of asking for what we want. And that, frankly, is nuts.We read books and blog posts about sales techniques until the cows come home. We take classes and courses to learn the latest ways to market and sell… all the while overlooking the easiest, most fundamental selling skills.So why does something as brain-dead simple as just ask work so well?Because two important things have been established prior to asking for what we want…Trust and ValueIf you were to walk up to a stranger in a restaurant and ask for a bite of their sandwich, you’re not going to get a very friendly reception.But if you’re eating with a close friend and you ask to try their sandwich – they don’t think twice, do they? You get what you want.They say yes because they trust that you’re not up to anything harmful – and they see value in your relationship and your happiness. So they share.It works the same way with your customers and prospects.Selling is pretty simple, really. If you’ve built a relationship based on trust and you’ve demonstrated value, there’s no need to worry or stew over the next step. Be confident and just ask.

Try it. Get over your anxiety or your shyness or whatever it is that keeps you from asking for what you want.Remember, if you’ve built trust and demonstrated value – people will be happy to help you.Just ask..Ok, Fess Up…What keeps you from just asking? Discuss…