What to Do When Success Bites You in the Ass 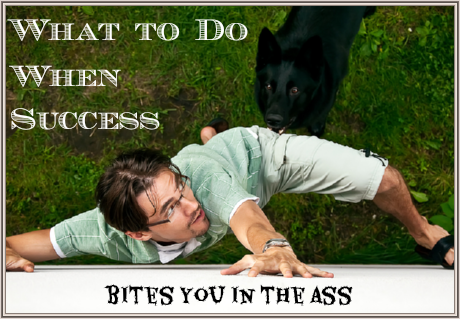 Your relentless pursuit of success is a lot like trying to hunt a wild animal.To pull it off, you have to know when to be aggressive – and when to be stealthy.Your prey, success, is smart and elusive. It’s skilled in dodging people like you and me whose goal is to catch it, tame it, and keep it as a pet.Eventually, if you have a smart strategy – and a ton of intestinal fortitude – the planets will align and you might just catch success by the tail.But even after it’s caught, success retains it feral instincts. It plays possum. It temporarily bends to your will, letting you think you’ve decoded all its secrets.Over time, you begin to believe that you’ve mastered it – which is exactly what it wants you to think.Your ego kicks in, and you begin to believe you have all the answers.You begin to believe that you’ve discovered the formula.The secrets of success are now yours. And they belong to you forever. Don’t they?Don’t they?Precisely at the moment you become distracted by your own glow, success springs back to life, bites you in the ass, and escapes back into the wild.

Why We All Need A Little Humility In Our Lives

I tried tying my shoes his way – and you know what? It is better.Now, if a friend came up to you and said, “Hey… let me show you how to tie your shoes”, first you’d think they were out of their mind.Second, your ego would kick in and you’d think, “Are you kidding me? I’ve been tying shoes my whole life! What could you possibly have to teach me about tying shoes?”But you know what? Your over-confidence would betray you.This way is better. It’s much better. I’ve been doing it for months now.And if something as stupid-simple as shoe tying can have an entirely different angle to it that you’ve never considered – so can everything else in your life.

“Pride is the mother of arrogance.” — Toba Beta

And yet, over my many years in business, I’ve see people in all walks of life become so sure of themselves after a period of success that they forget they can still learn from others and the world around them.That’s the #1 early onset symptom of an affliction I’ve dubbed expertitis. And it’s rampant.Expertitis clouds your vision, alienates you from others, and makes really smart folks look stupid. Oh yeah – and left untreated, it can be fatal to you future.You know people who are afflicted with expertitis. You’re thinking of someone right now. Their name is on the tip of your tongue, isn’t it?People with expertitis start to think they’re bullet-proof. They lose touch with “the little people” and often lose their humility.Most expertitis victims are really pretty decent people who have been more successful than most. But at some point something changes with them and they become a little too certain of themselves. A little too proud.Actually, being proud in and of itself is a good thing – and you should be proud of your accomplishments.But when you become so proud of yourself that your success blinds you, you’re on a collision-course with a big, ugly comeuppance.

How to Avoid Expertitis (and Getting Bit In the Ass)

Success is not an absolute. It’s not a math test. It’s not a chemical formula.Stay alert. The answers change. Often. (click to tweet this)Over the years, I’ve watched many successful people go from golden boy to busboy in their careers because of expertitis.I can promise you it will never happen to me, and my hope in writing this post is that you stay vigilant as you become more successful – so it never happens to you either.Like many afflictions, the trick to not suffering from expertitis is in prevention – not letting yourself get infected in the first place.Luckily, it’s pretty easy to do that.

And remember these words as you become successful. They’re especially important to remember after you’ve achieved your wildest dreams…

“Let it never be forgotten that glamour is not greatness; applause is not fame; prominence is not eminence.”– James R. Sizoo

So go conquer the world. Grab success by the tail. Achieve everything you’ve dreamed about.But if you’re going to all that effort, don’t let expertitis and your own pride take it away from you in the end. Have you seen people fall prey to expertitus & get bit by their own success? How do you avoid it? Let’s discuss…